So…last night I watched the episode and I filmed my reaction immediately, like didn’t even really check on social media didn’t really have time to let things sink in and I was kind of just…in a daze. Trying to process everything that happened. If you guys wanna check out the raw reaction to the episode check out the video below:

It is now the next day and I have had time to process everything, watch the episode again and go on social media to get the general thoughts on the episode.
Here’s the deal, PLL fans are not happy. And I can agree with a lot of them, I can see why people are angry, I have seen the lengths people have went to make their own theories and I can see how they’d be disappointed with the real thing.
I have to say I’m only like half disappointed with the episode. I mean I was definitely shocked when A turned around and it turned out to be CeCe. I was not expecting that. I was so sure A was a guy that I just…kind of shut down the idea that he could be a girl.
In fact, to me the whole transgender thing was a surprise. I didn’t think Pretty Little Liars would take that route. Mainly just because I didn’t see that being the style of the show, I’m fine with the way they went with the story but I just wasn’t expecting it. I saw a lot of theories about Charles being transgender, but a lot of people thought that Charles was originally a girl wanting to be a boy and not the other way around.
One thing I am definitely not okay with was Sara being Red Coat/Black Widow. And I know I’m not the only one. I said in my last blog post I didn’t want Sara to be Red Coat. She was only introduced this season and there is literally no motive behind why Sara was doing this or why CeCe chose her at all. I just…I don’t get it. Why Sara. She’s so…annoying. I really don’t like her so the fact this happened was just not okay with me.
But can we please talk about when Emily punched Sara? Because that was one of my favourite things about this episode haha.
I am also not sure why everyone is okay with what CeCe did to them. Like, she almost killed them and tortured them for years and yet they seem to be pretty willing to let it go. I’m sorry, but I wouldn’t be. I can understand why Alison would, but I don’t with the other girls. CeCe may have said she loved all of them, but I just don’t see how she did.
One thing we were promised is that we would feel sorry for A. And I sort of do feel sorry for CeCe but at the same time that doesn’t make what she did okay.
I also don’t understand the whole Mona and CeCe in Radley thing. I mean I understand CeCe agreed to play the game with Mona so that she could get out of Radley but why did she love hearing so much about the girls.
Did she really only punish the girls because they seemed happy Alison was gone?
And what are the odds of Bethany picking that yellow outfit to wear to escape Radley on the same night Alison was wearing it?
Because Bethany ends up stealing CeCe’s clothes and going after Mrs D for having an affair with her dad and so CeCe follows her and hits her with a rock. But that turns out to be Alison…so CeCe hit Alison.
Which leads us to…Mona killing Bethany. Um…what? I’m sorry, but there were just so many people in that general area that night Alison disappeared. I mean seriously can we just get a full episode with everything they said happened that one night. I need to know how everything played out. From the barn to Alison going to the kissing rock to Bethany getting murdered and Alison being buried alive. What really happened?
One thing I have to applaud Pretty Little Liars for is that they did give us a lot of answers. I know they may not have been the answers everyone wanted, but they definitely gave us more in that one episode than they ever did in the rest of this season. So yay for them finally following through on something haha.
Now moving onto the flash forward of five years…
Alison writing on a chalkboard…she is Mrs something…so is she married? If she is, every Emison shipper is gonna be heartbroken and we all know it. I kind of thought she just changed her name for safety reasons because at first I didn’t notice she wrote Mrs. Also she’s a teacher! Did we expect that to be Alison’s profession?
Also, he is coming for Alison so…you know someone new is after them. What else is new? Haha.
I’m excited about the time jump mainly because they are no longer going to be in high school. Which is good because they can’t pass for high school students for much longer, well maybe Sasha Pieterse can but that’s because she’s 19.
And of course, there are things that this episode never really answered…like who killed Mrs DiLaurentis, or if the mums ever made it out of the basement…these are things we all need to know. Hopefully, we find out in the upcoming episodes…
As for who I originally thought was A…well, I was kind of jumping on the Wren train with a lot of people but as we got clues revealed to us last night I made a spider diagram and CeCe’s name was on there! 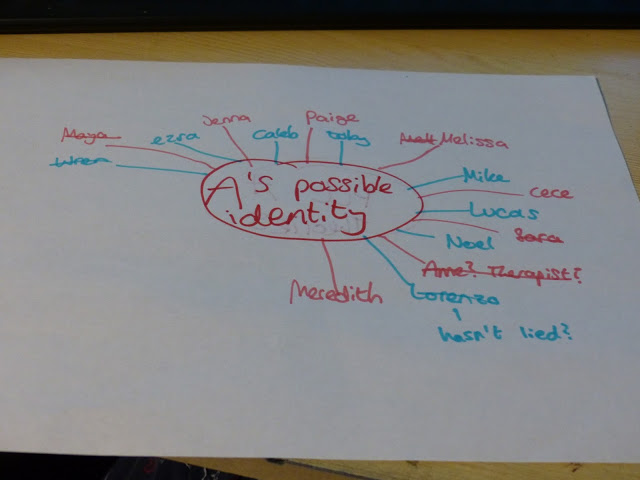 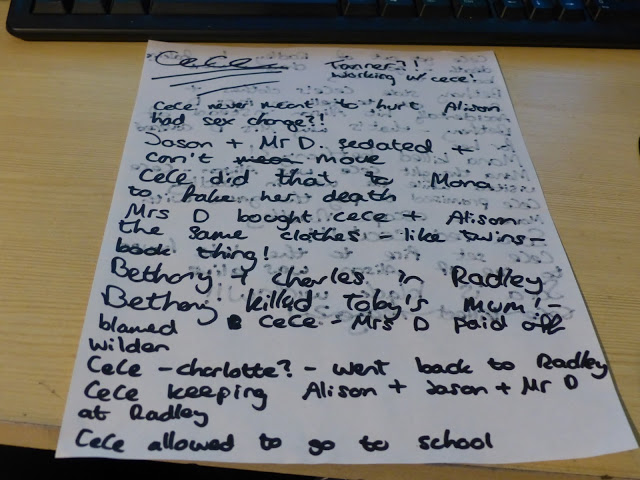 So what did you think of the Pretty Little Liars summer finale? Did you love it or hate it? Let me know in the comments below!
~ Courtney x