Hey guys!
So today I am here with another Pointless Book 2 blog post! Although I have to say that the YouTube video to go along with this blog post is probably more interesting than the actual blog post…

The first pages I decided to do in this video were pages 82 and 83 and those were the “book on your head challenge” basically I had to put the book on my head and draw some pictures…totally easy right? Haha nope. You actually have no idea where you are meant to be drawing and I know I was filming myself so I could have cheated but I tried not to and so…this is what I ended up with. 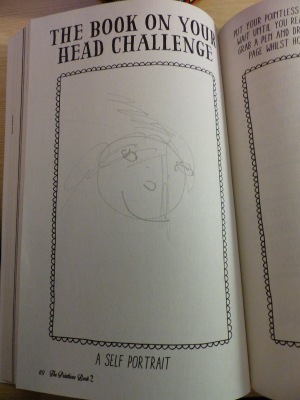 As you guys can see, I’m a really great artist haha.
The next two pages that I decided to do were pages 96 and 97, again another artsy thing however this time it was a lot easier because it was a paint by numbers! So there was no way I was gonna mess that one up, unless I read a number wrong and coloured something in the wrong colour but luckily that didn’t happen and we ended up with a really nice picture at the end.

What I found with doing the paint by numbers is that, it was actually really relaxing. It took me about half an hour to do the whole thing, and I know you wouldn’t think it would because it’s colouring in but it took a while and it was a really nice way to spend the night…I don’t know, maybe I just long for the days when I was 10 and colouring was an acceptable thing to do in your spare time. Although, I have seen these “adult colouring books” now and I think I’m going to have to buy one for myself sometime, we’ll see.
And so, that brings us to the end of another Pointless Book 2 blog post. I hope that you guys liked it, let me know in the comments below what you thought of my drawings, and be honest. It’s okay, I can handle it.
~ Courtney x