Hey guys!
So today I have another Pointless Book blog post but this time with a twist! I have collaborated with TommFearn in this video and it’s my first ever YouTuber collab and so I am very excited about it. I wasn’t really sure how it was going to work, mainly because Tom and I live nowhere near each other and so what we decided to do was send each other clips of us filling in pages of our Pointless Book and then we’d edit them together. And honestly, they turned out to be really good, I thought this was a really fun idea because instead of it just being me filling in my Pointless Book there was someone else there too.
So if you guys want to see both videos they will be below:

The next page that I did was page 179 which was to fill the page with things I love, and I decided to do this page by sticking photos in rather than just writing in it because I wanted to be a bit more creative. If I was super creative I would have drawn the things I love but I’m not the best artist in the world. Still, I really love the way this page turned out, and it definitely highlights a lot of things that I really love right now. 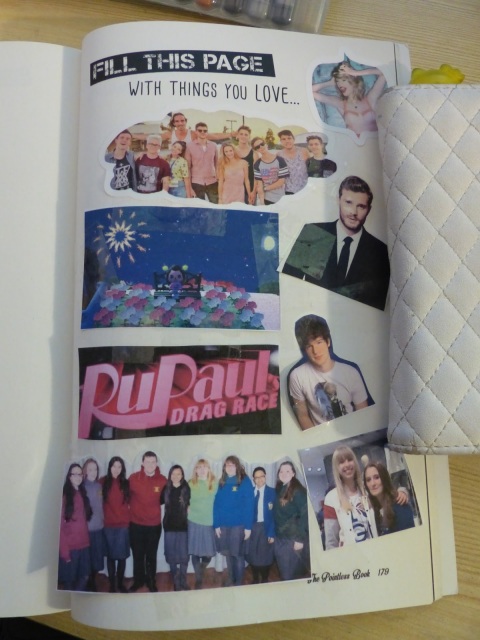 The next two pages I did in Tom’s video and the first one was to spray the page with my favourite scent, and obviously that page doesn’t look very exciting. But the scent that I chose for my page was Zoella’s Blissful Mistful  Body Mist and that’s because it’s the body mist that I have been using a lot and I really love the smell of it.

The last page that I decided to do was page to pick a song and write the lyrics on that page. The song I chose was Heartbreak Therapy by Tanner Patrick and that’s because I’ve been obsessed with that song for a long time now. Out of all the songs on Tanner’s album that’s the one I love the most. I wish I was able to get the whole song on the page but I think I got pretty close!

The first page that Tom did in my video was the music maker page where you played the lyrics of a random song to make up a new song. 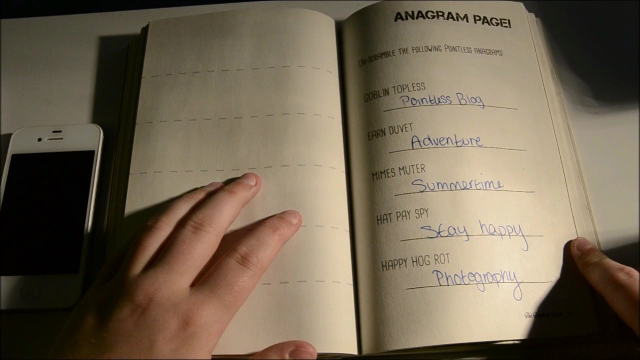 The first page Tom did on his channel was the page where you had to create a face using a magazine, however he didn’t have a magazine so he used a newspaper instead. The proportions are off by a little bit but other than that I think it was pretty good haha.

And the final page that Tom decided to do in his book was to write down the people you would want at your dream dinner party.

And so that is it for this Pointless Book blog post! I hope that you guys liked it. Like I said earlier I had a lot of fun doing a collab video because I don’t really have anyone around me to collab with so it was a great idea to be able to do something like this with Tom.
If you guys would like us to do more collabs in the future then please leave comments below giving us ideas of what we could do next, like I said we don’t exactly live near each other so we couldn’t really film together but if you had any other ideas similar to this then I’d love to know. 🙂
~ Courtney x