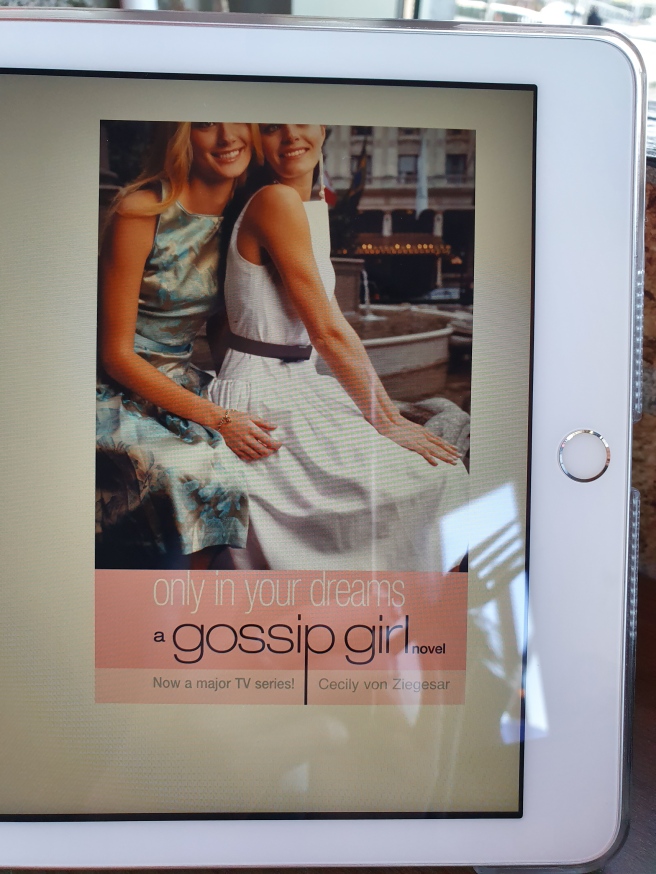 Summer has just begun for our Upper East Siders and honestly? It’s kind of drab.

I really enjoyed the previous book but this one was lacking.

Let’s begin by saying there was absolutely no Jenny Humphrey in this one which actually made the book feel a bit short. I mean it’s the same length as all the others but with one less character to be updated on it was definitely lacking something.

Plus, don’t we love when Little J just ends up everywhere the cool people are? I can’t wait until we hear about her boarding school adventures, or if we even hear from her at all.

I know in the TV show Jenny was only written off because Taylor Momsen wanted to do music, but what’s the excuse for her being written out of the book?

Next, I guess we can talk about Dan, who once again cannot just have a relationship with Vanessa. He decides to become all hippie and do yoga and go jogging because he met a cute girl in the book store he was working at. I was kind of amazed he was able to keep up his charade for so long. At least he wasn’t writing any poetry…

But yeah so Vanessa gets kicked out of her apartment because her sister comes back and decides she needs all the space for her new boyfriend, so Dan says it’s okay if she moves in with him and she thought that meant they could really be together but of course Dan is over it. Even though he was all about being with Vanessa five seconds ago at graduation. Classic Dan.

So while Dan is off with his blonde, hippie girl, Vanessa is failing as a filmmaker. She was working a job for five minutes and then gets fired. Yikes. But things aren’t always perfect unless your name is Serena, then yes it is perfect. Anyway, she somehow lands a job babysitting which is cute…I guess?

I don’t really know what was going on with Vanessa in this book but she was kind of lame. At least Rufus said she could stay in the apartment because she has nowhere else to go.

As usual, she and Dan end up kind of friends again. Honestly just want one of them to move on for good it’s kind of annoying.

Moving on to our Queen B, she’s not having a fun time in London because Lord Marcus seems to be way more into spending time with his cousin, so she flees back to NYC. But not before buying a wedding dress, because ya know, everyone needs one just in case right?

I wish there was more to the Lord Marcus thing but I guess there isn’t. B just leaves and we never hear from him again. I also kind of enjoyed the whole wedding dress thing and I hope that it doesn’t go to waste.

So now B is back in New York and her mother has to talk to her about her spending because the exchange rate was not as good as Blair thought it was and suggests maybe it is time for her to get a job.

Luckily for Blair, her mother is very close to a designer friend who is working on the movie Breakfast at Fred’s – the remake of Breakfast at Tiffany’s starring SVDW. Fancy.

So now B is working on a movie set and living her best life, plus she decides to move in with Serena for a while as she is living in the apartment building that Aubrey Hepburn lived in, in Breakfast at Tiffany’s so how could she say no? On top of that, we also have a cute neighbour who B seems to like, so like I said she’s living her best life.

Apart from the fact, her younger brother is dating someone who basically wants to be her which is a bit creepy, but she makes it work to her advantage.

Then there’s Serena who is discovering that acting is really hard and she is kind of failing at being an actress. Luckily for her B comes along to save the day and coaches her in all things, Audrey. Of course, she ends up being amazing at it because is it really Serena if she doesn’t magically pull things off?

She also tries to get with her co-star but he ends up being gay, aw well, you can’t win them all.

Over in the Hamptons, we have Nate who is working hard to get his diploma. While he is out there he meets a girl and decides to date her because when you’re as good looking as he is, why not?

In typical Nate fashion though, he realises his one true love is Blair and he doesn’t want to be with some townie and so he leaves her at the wrap party of the movie getting it on with Chuck Bass.

And so that’s where we are left off. Next everyone is headed to the Hamptons and I hope it’s more interesting. I mean, even as I say that I know Dan and Vanessa are going to continue to be on-again-off-again, Blair is going to try and resist Nate and fail and whatever Serena does, well she’ll be amazing at it and have a good time.

But you know I made it this far so let’s keep reading. Things in this book were just kind of dull, I wasn’t really excited by anything apart from Blair deciding to buy a wedding dress but even that didn’t come of anything great. Oh well. There’s still time for that whole Prince of Monaco storyline from the TV show to creep up and I would kind of enjoy that lol.

Anyway, until next time,

You know you love me,