This is probably old news but I am still going to post about it because I still have an issue with it – said every bitter person on the internet ever.

Hello, my name is Courtney Shek and I am addicted to Twitter.

It started in 2009, I joined a website, I wasn’t really sure what it was but it was pretty cool. I liked to post there because I related to other people on the site. It was a place where I could fangirl about Twilight and find people who also fangirled about Twilight. It was wonderful.

Flash forward 8 years and I am still an avid user of the site, still fangirling though not over Twilight anymore. Twitter has now become a sort of journal where I share random thoughts on things, mainly TV shows or things that happen in day-to-day life. There’s a reason my Twitter handle is Tweeting2Much.

Anyway, that’s all well and good, I like to use Twitter, I have established a little following and I follow all the people I want to be following.

Until a couple of months ago.

I was on my Snapchat and I saw that one of my friends had been locked out of their account because they changed their birthday. That was weird.

Twitter has only allowed you to add your birthday in the last couple of years. And I remember when I first found out you could add your birthday, I couldn’t put in my correct birth year. When I went to set my birth year the earliest year I could set it to was 1996. I was born in 1997.

This always annoyed me, but that day when I went to set my birthday, I found I could finally set my birth year to 1997. So I did.

Two seconds later, I was locked out of my account.

This made no sense to me, especially because I was 20 years old. How could I be under the age of consent?

So I googled Twitter’s rules to find out what the age of consent was.

Again, I was confused. I am clearly over the age of 13 so why was I suddenly locked out of my account?

They had locked me out of my account because 8 years ago I wasn’t the age I told them I was.

I guess it’s all my fault. I mean it happens. People lie to sign up for websites all the time. It didn’t seem like a big deal especially when I’ve been using the site this whole time and have never had any issue with my age.

And now I clearly am old enough to use the site so why block me now? What is the issue?

After getting the email I sent a photo of my ID to Twitter in the hopes of getting my account back.

While I was going through this ordeal I found out that this had happened to a lot of people. Everyone had turned to Reddit to complain about their issues and so did I. We all wanted to know what was going on and if there was a chance of us getting our accounts back.

After reading what people had to say, I didn’t hold out much hope.

A week or so later I did get a response from Twitter, and it said:

Great. 8 years and that’s how it’s going to go down Twitter?

Thankfully Reddit users gave me hope that even if they reject you the first time if you sent in your ID again you could possibly get your account back.

So I sent my ID again. And have been waiting for a response ever since.

This was at least a month ago and I have heard nothing, I have tried sending my ID again but all I get are emails saying that I already have an open case with them and to be patient.

Sadly after two weeks or so of being ‘patient’, I couldn’t wait any longer and set up a new Twitter account. Something I didn’t want to do because I didn’t want to start again with a different username and having to go through and follow the 300 something people I used to follow before.

But I did it because as angry as I was at Twitter for blocking me out of my old account, I missed my timeline and sharing my thoughts.

So here I am with my new Twitter. I’ve had it for a month. Nothing too exciting but I guess it’s something.

Not long after I made my new Twitter I saw that Twitter support had tweeted and were aware of the issue of people being locked out of their accounts. So again, I got my hopes up thinking that they were going to fix the situation. 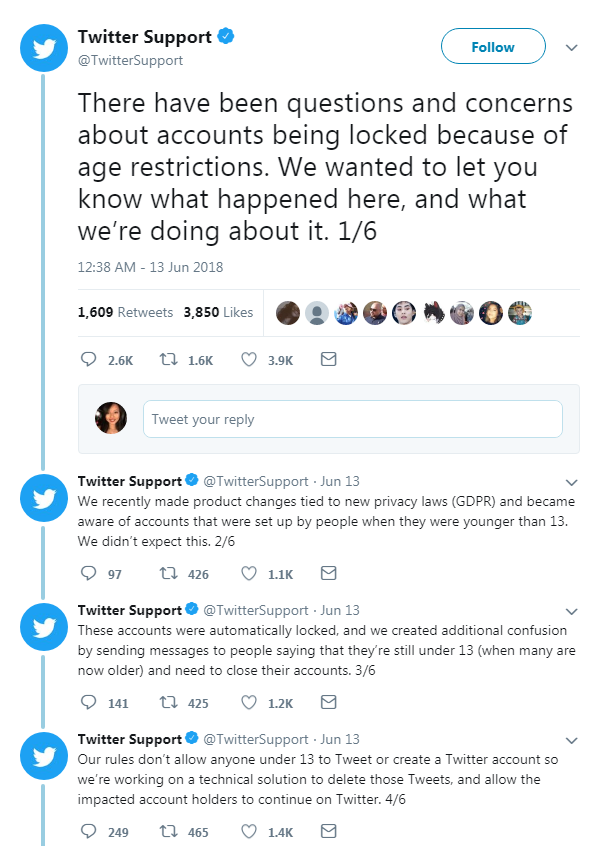 I still haven’t heard anything.

I know that a lot of people got their account back just by sending in their parents’ ID. Which is something you can do instead of sending in your own. But not only do they want your parents’ ID they also want proof that they are your legal parent/guardian. Which to me is a bit excessive just to get your social media account back.

That, and I told my mum what was going on and she thought it was stupid. And probably doesn’t want me sending her ID away to a random website.

So I’ve been holding out.

I know it seems kind of stupid to be so focused on getting my old account back when I have my new one but I was kind of attached to my old account. It basically documented my entire teenage life. And now I can’t get access to it at all.

The only thing I really want out of all of this is to be able to download a Twitter archive and have my original username back.

It’s the least they could do before shutting the account down forever – if that is even something they are going to do because I can still log into the account.

It’s a mess, and if they had just asked for your birth date when you signed up back in 2009, instead of just having you tick a box, this probably wouldn’t be happening right now but there you go.

I still feel like it’s stupid to lock people out now when they are clearly old enough to use the site. I mean I guess it goes to show that actions have consequences. Even harmless things like lying and saying you’re one year older than you actually are to sign up for a website.

I was hoping to have my account back by now but at the rate it’s going I don’t see much luck. So I guess I’ll stick with my new account, see how it goes. Hope that in another 8 years I don’t get banned again for some obscure reason…