I just wanted to make a little blog post to let you all know that I don’t just have this one blog but I have several.
If you know me, then you know that I like to use the internet to express myself. Sort of put myself out there into the world. And one way that I like to do that is through blogging. And in 2011/2012 I found a blogging website called Tumblr.
I don’t really remember how I found it but I just know that I can’t stop using it now that I have it. I think I have had a Tumblr blog since 2012 and it is where I started to write blog posts regularly again after I stopped using Bebo. But I soon found that Tumblr was not the best place for a proper blog.
To me Tumblr has always been a place for gifs, fandoms and internet memes and so now when I use Tumblr it’s mainly to reblog something that Tyler Oakley has reblogged.
Although I do have a few Tumblr blogs and so I thought that I would tell you about them today in case you are interested in seeing what else I get up to on the internet. 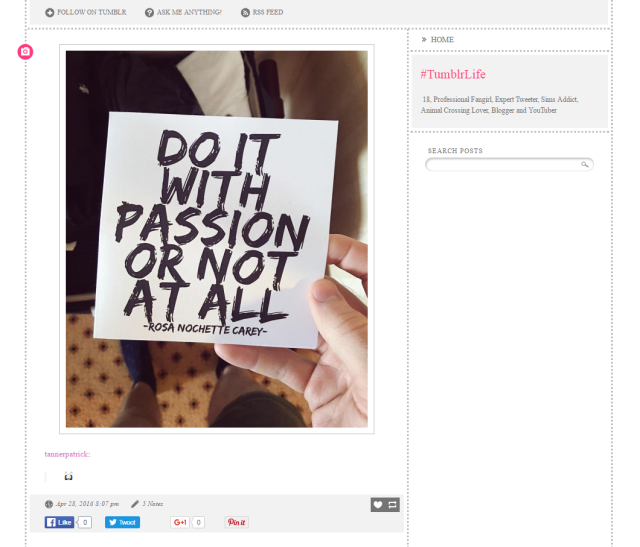 My main Tumblr. This is the blog I have had since I first got Tumblr. I think I had one before this but I don’t remember. Anyway, this blog has been through a lot with me, from the days I used to write long text posts on Tumblr about my school days to the Instagram posts I would share, to the random gifs I would reblog of the TV show that I like.
It’s got everything, but mainly it’s for my fandom things.
I recently changed my Tumblr URL because my old URL used to reflect all of the fandoms I was in but since I started Tumblr my fandom interests have shifted a lot. So I thought the fangirl-stuff name would cover all my bases. My old URL was CullenGleekVonVanity1864 – which is a mouthful but I was really proud when I came up with it haha. Let me break it down for you: Cullen = Twilight, Gleek = Glee, Von Vanity = Blood on the Dance Floor and 1864 = the Vampire Diaries. Those were my main loves of 2011.
Now I have way too many fandoms to fit into a username and so I feel like this is a good URL to stick with, at least for now. Maybe I’ll change my mind again in the future. Who knows?

My second longest running Tumblr blog. Thanks to this blog, I now know that an Animal Crossing fandom exists. And it is wonderful.
So I really only started this blog because I took a lot of screenshots when I played Animal Crossing: Let’s Go to the City, and I wanted somewhere to put them. I had no idea Tumblr had a little community for Animal Crossing players.
This is the blog you want to go to for anything I have Animal Crossing related. At first, I didn’t think I could have a blog dedicated completely to one topic but turns out I can.
Animal Crossing has been a love of mine for a long time and so to be able to share that love with other people is amazing. So if you want to know about any of my adventures in any of the games in the Animal Crossing series, this is the place to go.

This blog is now kind of dead…mainly because I stopped playing the game Tomodachi Life.
I was so excited when I first got the game and I really wanted to have a blog dedicated to my gameplay of Tomodachi Life, similar to the way I did with my Animal Crossing blog.
Unfortunately, I wasn’t as committed to Tomodachi Life as I am to Animal Crossing. I also found that after a while the Tomodachi Life gameplay got extremely repetitive after a while.
It was kind of like a super watered down version of Sims. And you didn’t really have as much freedom with the game as you would have liked. And so when I stopped playing the game, I stopped updating the blog.
I still have it up on Tumblr though if you are interested in seeing it. I think I had a lot of interesting people on my island. Mostly YouTubers, some people that I knew. But yeah. It was good while it lasted.

My latest Tumblr blog. Again, like with Animal Crossing I have a lot of love for the Sims.
I have been in love with the Sims since the Sims 2 for the PS2. We used to have a demo disc for the PS2 that had loads of game demos on it and I would play the Sims 2 one all the time. I did eventually get the full Sims 2 game but still have yet to complete it.
Since then, my love for Sims has grown, so much so that I thought it was time to dedicate a Tumblr blog to it.
I currently only post screenshots from my Sims 4 gameplay and also reblog custom content that I have installed in my game but I hope to continue to document my Sims adventures here just like I do with my Animal Crossing ones on my other Tumblr blog.
So if you are looking for anything of mine that is Sim related, I recommend you check out this blog.

And so those are all of my current Tumbr blogs! I am pretty sure I have had others in the past which I have deleted because they didn’t work out. But these are the four main ones that I have right now and plan on sticking with for the foreseeable future.
And of course I will also be sticking with this blog. Even though I feel like I haven’t written here in a while. I think it’s been over a month since my last post. I do promise to try and update whenever I can but sometimes, I don’t really have much to blog about. But the semester is almost over, and soon I will have completed my first year at university, so be sure to stay tuned for a recap of that in a month or so!
~ Courtney x