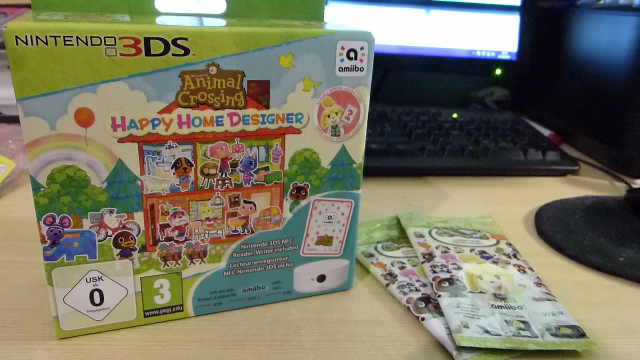 It has currently been in my possession for three days and I am already obsessed. I tend to get hooked on Animal Crossing games right from the get-go. There’s something about them that I can’t resist, they are just so adorable and easy to play so I just get sucked in. And this was no exception.
Since this is a spin-off game is has a lot less content than a main Animal Crossing game. I mean the main goal of this game is to design houses. That’s really it. Nothing else to it. You can also design the shops/facilities in the town area which is known as Main Street. But other than designing this game doesn’t have a lot else going for it. So if you are considering getting an Animal Crossing game that’s something worth noting.
At first I wasn’t sure how I was going to feel about this game. If I’m honest I kind of thought I would get bored of it right away. But that’s not the case. I mean I play a lot of Sims and so I do like designing houses and things but something about this game gave me the impression I would play it for two days and get bored. I actually find this game really satisfying to play. Which is kind of the feeling I get with every Animal Crossing game.
There’s just something really peaceful about designing animals’ homes. It’s really cute and I love seeing the villagers’ interact with their new surroundings. It is definitely a different approach to the Animal Crossing series. But I love it.
For one thing, it is so much easier to create houses in the way you want to in this game. Which is obviously one of it’s major selling points. If you have ever decorated a house in Animal Crossing then you know the pain of putting something out and dragging it around the room trying to get it into the right position. With this game, you are able to place furniture with a touch of a stylus.
Another thing I really love is the new additions to furniture. We can now place rugs, hang lights from the ceilings, and even change our curtains and windows. I like these little touches because they can add so much more to a room than before.
On top of these new additions I have noticed there has been a whole load of new items added to the catalogue which is to be expected for a home designer game.
Something I was most excited about when I heard about the game was the addition of designing the exterior of the house as well as the interior. In past Animal Crossing games we haven’t been able to place furniture outside with the exception of Animal Crossing: New leaf public works projects. So this was something I was really excited about. I like having that extra bit of freedom.

One thing that is annoying with exterior design is that you can’t rotate the houses. They are always facing forward which isn’t great when you want the villager to live on the beach and their house looks like it’s going to be whisked away by the sea. You also can’t rotate the camera outside to see things from different angles which again is quite limiting.

I have also really enjoyed building the facilities in Main Street. Mainly because you are given so much space to create these rooms. In previous games, if you wanted to create a school themed room you would have to do it in your tiny house. Now, we can create them in an appropriately sized room and make them look any way we want to.
While I enjoy this overall game concept as a whole, it does have it’s flaws.
For example, I am not a huge fan of the item catalogue interface. I find it really tedious to swipe to each new page of items. I wish we had a scroll bar at the bottom to make it faster to find items. I know you can search with the search feature, but I like to look through all my items to make sure I have used everything I want to when designing a house.
I also don’t like that this game doesn’t run in real-time like all other Animal Crossing games. We now have to save every time we are done creating a house. Which wouldn’t bother me but it’s the fact you have to keep going all the way to your desk. I know in past Animal Crossing games we would have to go to the attic to save, but even then we had the option of pressing start to save from wherever we were. Once we save it turns into a new day in the Happy Home Designer game, which to me just wastes a lot more time. Although it does teach younger children the importance of saving your game. But Animal Crossing has always stressed the importance of saving your game with the character Resetti.
Oh and I also dislike how we have to wear the red Happy Home blazer all the time. You can change your clothes if you are visiting a house or facility but any other time you have to wear the blazer. You can however accessorise your uniform with other clothing items and accessories.
As for the amiibo cards…I did end up buying a couple of packets of them as well as an amiibo card reader as I will use them in the future but so far I have only used one. I can see the appeal of them as many people will want to collect their favourite villagers and I believe it’s the only way you are able to design a house for a special character such as Isabelle. However, I do feel like if you are on the fence about getting amiibo then don’t. It isn’t worth it if you are not up to the challenge of collecting all of the cards. Amiibo cards aren’t essential to the game either so you can still enjoy the game without having them.
I also can see how having an amiibo card reader can be a hassle if you are travelling and want to bring your amiibo cards. It’s just an extra thing to carry around. And you do need to get an amiibo card reader if you don’t have a new 3DS but want to use the amiibo. So there’s that to think about too.
But overall I am really enjoying this game. I have already created half of the facilities on Main Street and am well on my way to designing homes for every villager in town. So despite the few little issues I have with the game I definitely recommend it if you enjoy designing things. Plus, the cuteness of Animal Crossing is definitely a major selling point for me.
So those were all my thoughts on Animal Crossing: Happy Home Designer! I hope that you guys enjoyed this post. If you guys want to see more of my Happy Home Designs then follow my Animal Crossing Tumblr: antrim-in-animal-crossing.tumblr.com
And if you are interested in seeing the unboxing of Animal Crossing: Happy Home Designer with the amiibo card reader and some amiibo cards then check out my video below: